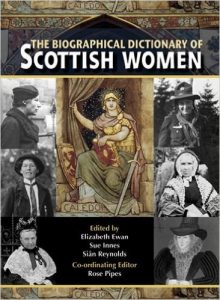 The second edition of the Biographical Dictionary of Scottish Women will be published on 31st October 2018, publication date to help celebrate the centenary of the extension of the parliamentary vote to women over 30 in 1918. The editors asked me to add entries on two more notable Scotswomen to add to my existing four. The six are: Winifred Maxwell, Lady Nithsdale, who helped her husband escape from the Tower of London after the Jacobite Rising of 1715; ‘Colonel’ Anne Mackintosh, who raised the Clan Chattan for Bonnie Prince Charlie’s Jacobite army in 1745 while her husband was doing his duty on the opposite side; Trooper Mary, a woman who fought as a soldier alongside her husband; Anne McKay, a poor woman from Skye, who suffered terribly for helping a prominent Jacobite escape after Culloden; Anne Leith, who fed and helped imprisoned and wounded Jacobite prisoners in Inverness; Henrietta Tayler, Jacobite historian and volunteer Red Cross nurse during the First World War.