Last year I realized that this year, 2022, would be the 25th anniversary of the first publication of Damn’ Rebel Bitches: The Women of the ’45. I approached the publisher, Penguin Random House, and suggested a special edition to mark this milestone. I’m delighted to say that the new edition will be available from all online and High Street bookstores from Thursday 10th March. 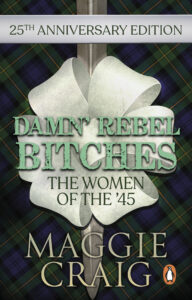 The bold and dramatic cover was designed by Cathy Helms of Avalon Graphics. As was the cover of the companion volume, Bare-Arsed Banditti: The Men of the ’45. The new editions of both books will be published on the same day, 10th March, 2022. 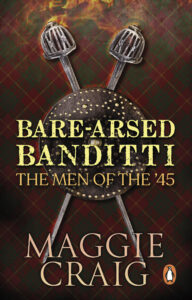 The text in both books is 99% the same as in the older editions. I’ve made a few tweaks where updating was required. The big difference apart from the covers is that both books are now fully referenced, in end notes. Those who want to dig deeper can use these to do so.

It took me nearly four months last summer to add the references, combing through my files of photocopies and notes taken when I was doing the research. It was hard work but I enjoyed once again meeting all the men and women who people the books. I was really grateful that I was able to check so many sources online.

That wasn’t the case when I first started researching, way back in 1995-96. It involved travelling to libraries and archives, finding your way around the different classification systems and humbly asking if you might be permitted to make/request some photocopies. It was hard work but it was rewarding too. There’s a real thrill in reading a letter written by someone 250 years and more before. Here’s a link to an article I wrote for Historia online magazine about the differences between research then and now.

This article shows the previous covers. I loved them too but it’s good to freshen things up!